The first culinary evidence of the fajitas with the cut of meat, the cooking style (directly on a campfire or on a grill), and the Spanish nickname going back as far as the 1930s in the ranch lands of South and West Texas. During cattle roundups, beef were butchered regularly to feed the hands. Throwaway items such as the hide, the head, the entrails, and meat trimmings such as skirt were given to the Mexican cowboys called vaqueros as part of their pay. Hearty border dishes like barbacoa de cabeza (head barbecue), menudo (tripe stew), and fajitas or arracheras (grilled skirt steak) have their roots in this practice. Considering the limited number of skirts per carcass and the fact the meat wasn’t available commercially, the fajita tradition remained regional and relatively obscure for many years, probably only familiar to vaqueros, butchers, and their families. 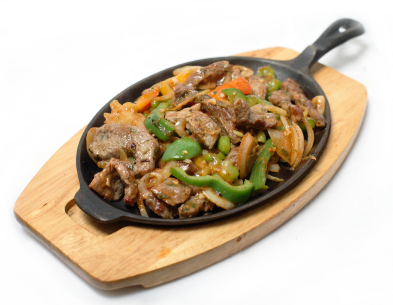 The food became popular in Tex-Mex restaurants in Houston, Austin, and San Antonio. In southern Arizona, the term was unknown except as a cut of meat until the 1990s, when Mexican fast food restaurants started using the word in their marketing. In recent years, fajitas have become popular at American casual dining restaurants.

In many restaurants, the fajita meat is brought to the table sizzling loudly on a metal platter or skillet, with the tortillas and condiments.